I’ve been listening to American folk legend Michael Hurley since my American friend Bob Moore introduced me to his music in the early 90s. Over the past 25 years, Bob has been feeding me a constant stream of Hurley and I’ve amassed quite a collection of mixtapes, CDs and vinyl, along with various other paraphernalia including magazine articles, compilations, and Hurley’s own unique comic books.

For most of those 25 years, I’ve been dreaming of the day I would finally get to see him, while not thinking it could really be possible. My trips to the US never seemed to coincide with any of this shows, and so few people seemed to have heard of him that it seemed impossible that he could ever come to Australia. So imagine my surprise and delight a couple of weeks ago when I discovered that not only was he touring Australia, but he was playing next week! Excitement gave way to despair as I saw that the shows were mostly sold out, but back to excitement when I saw an extra show had been scheduled. So, extravagant as it may be, this was one of those once-in-a-lifetime shows that I just couldn’t live with myself if I’d missed, so tickets and flights were booked for a whirlwind trip.

Arriving early, I saw a small, white-haired man in a bright multi-coloured jacket walking past and jumped at the chance to meet him and get an autograph before the crowds arrived. He was happy to oblige, while I struggled to contain my excitement at finally meeting my hero, and tried to think of something intelligent to say. Fortunately he knows the abovementioned friend Bob, so telling him the source of my fandom gave us an easy topic for conversation.

I encountered a few other die-hard fans in the audience while we waited for the show to start, but I think the vast majority were there out of curiosity and not really knowing what to expect. What they were treated to was a slight, 74-year-old man who could hold a whole room captivated with seemingly little effort. Hurley’s unique brand of outsider folk music is deeply rooted in American folk, country and blues traditions, yet thoroughly original to the core. With his quiet, understated vocals and sometimes simple, sometimes intricate guitar work, combined with quirky and original lyrics, Hurley took us on a journey through the American backwoods, with stories of roads less travelled and odd characters who fly under the radar.

I currently have 175 Michael Hurley songs on my iPod, and thought I knew a large portion of his repertoire, but this doesn’t even scratch the surface of his prolific output. I knew around half of the set he played, with the rest being entirely new to me. This is a man who has been producing music for 60 years, and shows no signs of slowing down.

Afterwards I went a little crazy at the merch desk, getting the special NZ/Australia commemorative t-shirt and cassette, as well as the 7-inch single with Hurley’s artwork on the cover. I also went back to get more of my vinyl signed and have another chat, and finally tore myself away with a big smile on my face after a warm hug from the great man. Then back to the airport to await my early morning flight, arriving back home in Launceston by 830am, feeling like the whole thing was one big, very pleasant, dream. 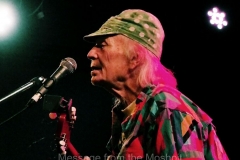 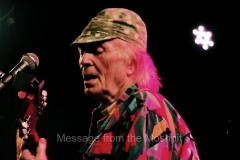 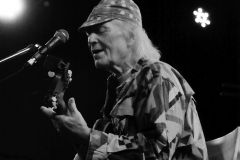 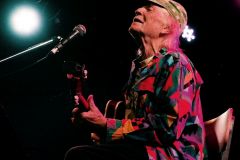 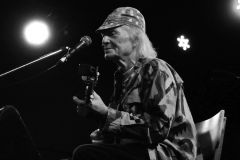 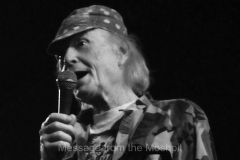 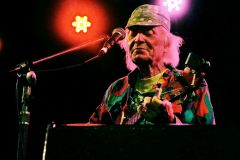